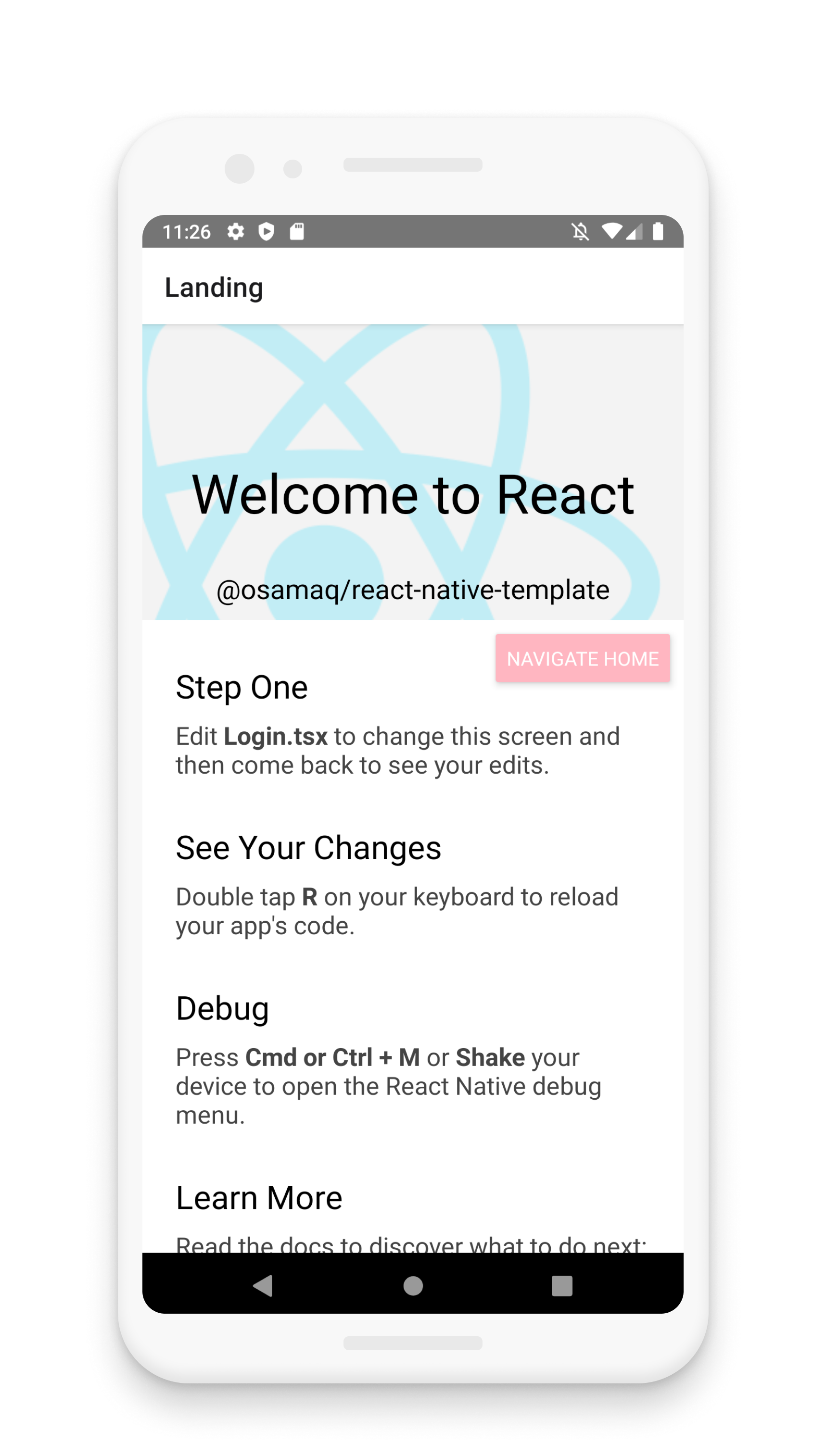 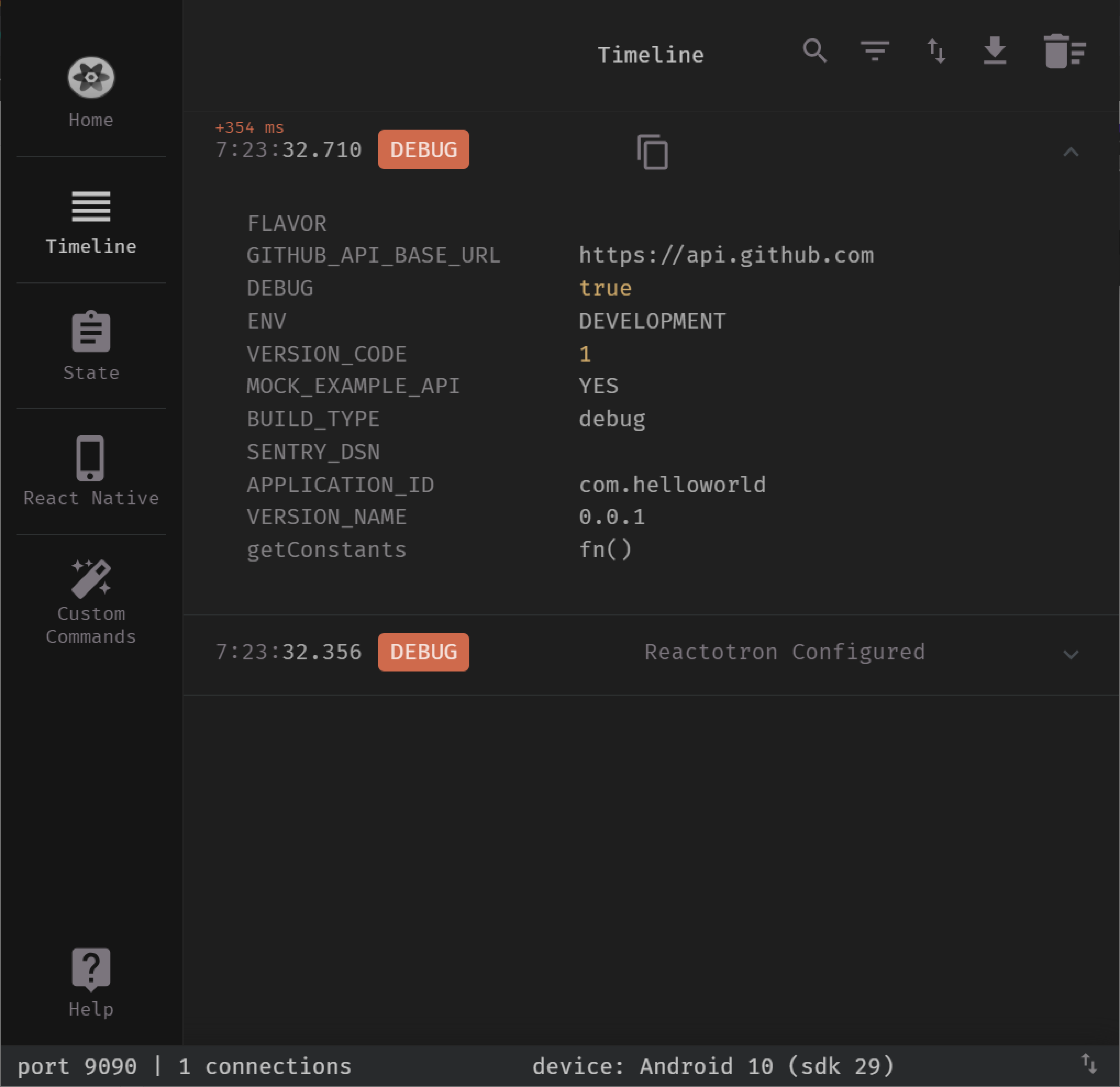 A minimal template with architecture and boilerplate to let you focus on writing features right away.

This template comes with Sentry, but its disabled until you connect your account.

Insert your sentry DSN in each .env file (dev, staging and production) and you're all done.

This allows you to use Reactotron within Flipper.

Let's briefly go over the benefit of each library included in this template.

But in all seriousness, if you are considering this template I assume you are a TypeScript fan. If you happen to be a JavaScript user, this template might be overwhelming. If you would like to start learning TypeScript, I suggest bootstrapping with this instead react-native-community/react-native-template-typescript so you can learn at your own pace.

This library simplifies data fetching and cache management. It allows you to easily show cached data, while the new data is being loaded from the API.

Its a wrapper around axios with extended functionality. I'm happy with its API and I like the problem matcher.

I'm happy using Redux Toolkit. It's a lot more concise now and I enjoy the redux ecosystem of plugins.

SWR reduces our dependency on Redux for global state. And sometimes React Navigation can be used to send data to the next screen. I try to leverage these two before reaching out to global state.

If you prefer something else, remove redux and go with that. Do not waste time trying a new state management solution.

This is used alongside Redux for complex background work. Most people will rarely need to use something like this. In fact, if you aren't sure, just remove it (also uninstall its dependency, rxjs).

It is the most popular navigation library. For most apps, this is the best choice.

Using this template there will be two main deubgging tools in your toolbelt. Reactotron and Flipper.

I mainly use Reactotron for reading API calls, asyncstorage operations, redux actions etc. It organizes everything in a neat way. It also has a killer image overlay feature, which allows you to get the UI design pixel prefect.

Flipper could be used for lower level debugging, such as viewing your database or React component tree. There is also a Flipper plugin for using Reactotron within it, so you only need to start one application.

Benefitial in debugging issues that occur only in release builds. You can view error stack traces for unhandled exceptions. You can also choose to log specific errors in some catch blocks to study how often they occur in production.

In this template, there is a custom Redux middleware that adds Redux actions as breadcrumbs to Sentry reports for even easier debugging.

This is similar to redux-sentry-middleware but I've yet to test that one.

Prefer using SVG over images all the time (remember to optimize your SVGs).

If you have different development, staging and production variables, this library is very helpful. It allows you to declare environment variables that can be accessed by all 3 sides (android, ios, JavaScript).

Android: by default, running react-native run-android will use the development .env file. To load .env.staging we must use:

Note: the above works on MacOS. For windows its a bit different. See Different Environments.

iOS: two additional schemes are created in the Xcode project for staging and production. The corresponding .env file is set via the scheme's pre-action:

NPM scripts for running the app with the desired configuration are included for convenience.

For caching simple data such as user perferences.

Drop in replacement for the <Image/> component. I've found this to give a performance boost on android when rendering many images.

Mirage is an in-memory server for intercepting API calls and returning whatever data you want. Very useful for developing before the backend is deployed, and for confirming how the app reacts to different API call outcomes.

Fastlane community has an endless amount of mobile development automation plugins. I currently use it mainly for automatic versioning, and often for deploying to Microsoft's App Center in one command.

This template also has a fastlane command for adding version badges to app icons. Useful outside of production as it makes it easier for QA to tell the app version.

If you appreciate those libraries and find them useful, please consider supporting them.

Quickly get an idea about each folder's role.

If you would like to learn more without going through the codebase, read the file walkthrough here.

This template is modified from react-native-typescript-template. Thank you ❤️