G3 is a flexible Javascript framework for building steam gauge instrument panels that display live external metrics from flight (or other) simulators like X-Plane and Microsoft FS2020. Here's a screenshot with some of the included flight gauges (or try this live demo):

G3's goal is to provide a lightweight, browser-based solution for building steam-gauge control panels using simple hardware atop a commodity LCD display, powered by an affordable single-board computer like the Pi. One of my original inspirations was this awesome Cessna setup. G3 could also be useful for interactive data visualizations and dashboards.

The name G3 is a tortured backronym for "generic gauge grammar"—and has an aircraft connection—but was mainly chosen in homage to D3. It's part of a quixotic pandemic project to build a DHC-2 Beaver simpit. Although there are plenty of alternatives for creating instrument panels, I decided it would be fun to roll my own based on pure Javascript with SVG using D3. After several iterations, I ended up very close to the pattern suggested by Mike Bostock several years ago in Towards reusable charts. 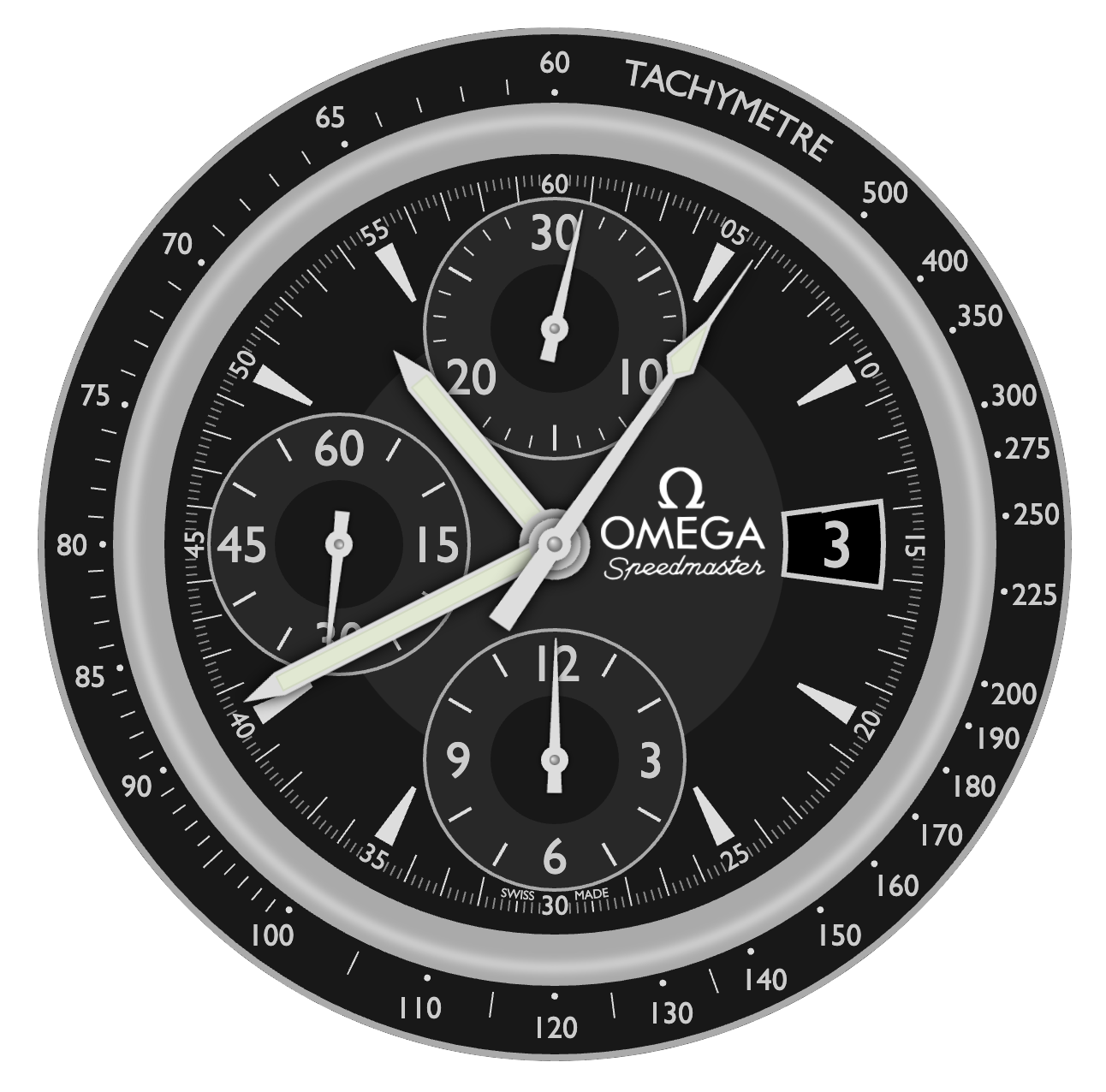 You can skip installing altogether and just refer to a standalone copy of the module distribution from an NPM CDN like these:

You can also set up an npm project, by creating a project directory and installing G3:

If you prefer, you can download a bundled distribution from github, by picking any of g3[-examples][.min].js, clicking the 'Raw' button, and then right-clicking to "save as". The base g3 package provides the API to define gauges and assemble them into control panels, and the g3-examples package adds a bunch of predefined gauges and panels that you can use or modify. The .min versions are minified to load slightly faster, but harder to debug. Choosing g3-examples.js is probably a good start. See Contributing if you want to hack on G3.

Check things are working by creating a minimal HTML file that displays an existing panel with fake metrics. Create a new file called test.html that looks like this:

This tells G3 to fetch the pre-defined DHC2FlightPanel example panel, and draw it as a new SVG object appended to the HTML <body> element. By default the panel provides fake metrics so you can see your gauges moving in a somewhat realistic but random way. Save the file and use a terminal window to serve it locally using your favorite HTTP server. For example try:

and then point your browser at http://localhost:8000/test.html. You should see something that looks like the live demo above.

Create a panel with existing gauges

The examples folder included with g3-examples.js contains a number of predefined gauges including clocks, flight instruments, engine gauges, and electrical gauges; as well as a few example panels. You can see them all at once by modifying test.html to display the DebugPanel which displays every registered gauge, including exploded views of all named sub-gauges. (Temporarily naming an anonymous sub-gauge is a useful debugging technique.)

Let's create a new panel that shows a clock and a heading gauge side by side. Create a new HTML file called panel.html:

This defines our SimplePanel which—when called via panel('body')—creates a 600x300 SVG container within the document <body>, retrieves existing gauge definitions, and centers them at (150,150) and (450,150). By convention gauges are drawn with a radius of 100 SVG units, but you could simply add .scale(1.5) to the put() if, say, you prefer a radius 150. Serve locally as before and browse to http://localhost:8000/panel.html and you should see something like this:

We've built a panel, but by default it displays fake metrics generated in the browser. G3 normally polls an external URL for metrics, and expects a response containing a JSON dictionary with an entry for each metric. Unless we specify a polling interval, it will check four times per second (an interval of 250ms). Let's modify panel.html, replacing panel('body'); with:

Now we need a server that provides metrics at the /metrics/fake.json endpoint. To start with we'll run a server that also provides fake metrics, so the behavior will look similar but gives us the stubs to hook it up to whatever source we want. Grab this sample G3 python server based on FastAPI from github. Copy your panel.html to the g3py/panels/ folder, and follow the README to launch the server and browse to your control panel:

You should see your panel working again, but the browser console log should show that it's fetching metrics from the server. More usefully, our server would fetch metrics from our simulation, for example via SimConnect for FS2020, or XPlaneConnect for X-Plane, and deliver those to our endpoint.

Now start up a flight in XPlane and open your panel in the browser as above. You should see our flight panel mimicking the live XPlane display. You can see how the server maps XPlane metrics via datarefs in mapping.yml here. It will even automatically convert between compatible units to match your gauges!

TODO: include an example based on FS2020 SimConnnect

The easiest way to get started with gauge design is to find a similar example gauge in the DebugPanel, and experiment with its implementation. As a simple example of building a gauge from scratch, let's build a classic Jaguar E-type tachometer (photo, below left). With a few lines of code, we'll end up with a credible facsimile (below right). 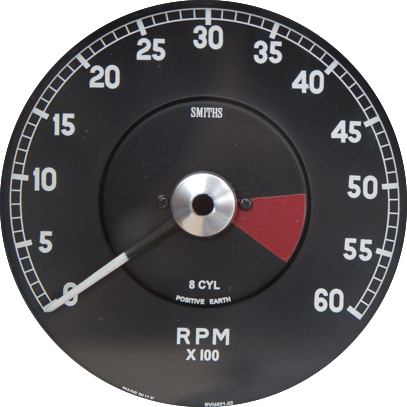 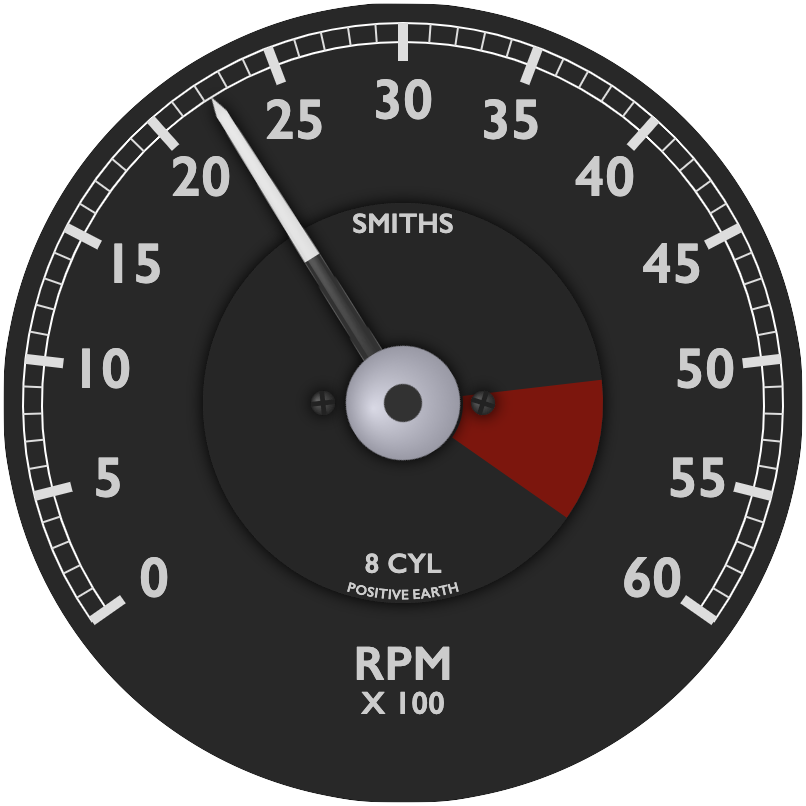 Let's get started by creating a new HTML file called jagetach.html, and build a skeleton for our gauge. We'll choose a name for the gauge, specify the external metric it should display (with explicit units if possible), then define a measure which translates the metric values to the scale on our gauge. The trickiest part is to estimate the angular range of the tachometer scale. We can guesstimate by eye (it looks like it occupies about 2/3 of the circle, so a range of -120° to +120°), we could measure with a protractor, or we can draw a line through the center point of the original image and see what range of metric values span 180°. In our example, 180° represents a range of about 43(00) RPM so we want a total span of 60/43*180 or about 250° in total, ranging from -125° to +125°. After defining the measure, we'll add a default face (dark-shaded circle) along with an axis line, ticks and labels, and then draw it to the screen. Here's what we have so far (see result below left): 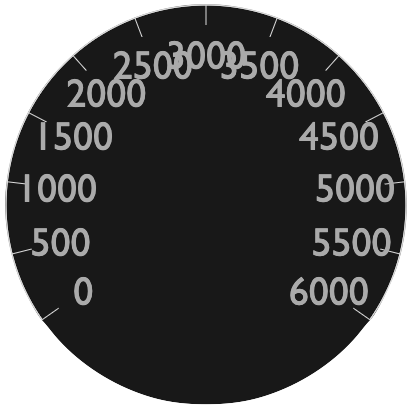 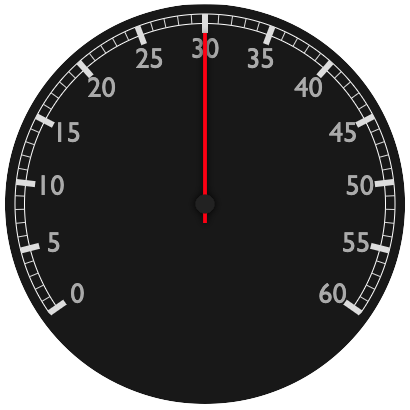 Now let's scale the gauge to make it little larger in the panel, and then inset and customize the axis marks to look a little more like the original. We'll also add a default pointer so we can actually see our RPM measurement (result above right):

Finally, we'll add a few labels and customize the pointer to look closer to the source, though the fonts and logo could certainly use more love (result top right of this section). The custom pointer is probably the fiddliest part, but is not too bad with a basic understanding of SVG paths. It's also possible to extract path definitions using a text editor, either from existing SVG images or files created via an SVG drawing tool like Inkscape.

If you're obsessed with matching your original gauge "perfectly", a helpful trick is to temporarily overlay a high quality, partially transparent image of the original (or half the original) on top of your gauge. For example, modify your panel to look like:

In this tutorial we reused the engineRPM metric defined with the sample engine gauges, but it's easy to add our own. Simply choose a name for the metric that matches how it will be provided from the external source, and (if desired) register a corresponding fake metric for testing. Note it's often a good idea to test metric values outside the expected range (e.g. max of 7000 instead of the max label of 6000) to ensure your gauge behaves as expected. For our tachometer we probably want to clamp the pointer as if there was a physical stop at 6000:

Extra credit If you want to explore further, try modifying the tachometer to add a simple sub-gauge in the bottom quadrant which shows a simple clock with hours and minutes.

If you want to extend G3, improve the documentation, or just add your own examples back into the package, you should start by forking and cloning the git repo followed by npm install. I'm currently tracking a few open issues and ideas in TODO.md if you're looking for something to play with.

You can test your changes locally by serving directly from the src/ tree using Web Dev Server. Start it via npm run start and you should see the debug panel in your browser, served from src/index.html. (Note this HTML script uses module style imports unlike the production distribution.)

You can rebuild the bundled package in dist/ using rollup by typing npm run build. Once you're happy with your changes, make a pull request. When I want to publish a new release, I also bump the version in package.json, then commit and tag in github and finally publish with something like: