Desktop app for Google Music on top of Electron 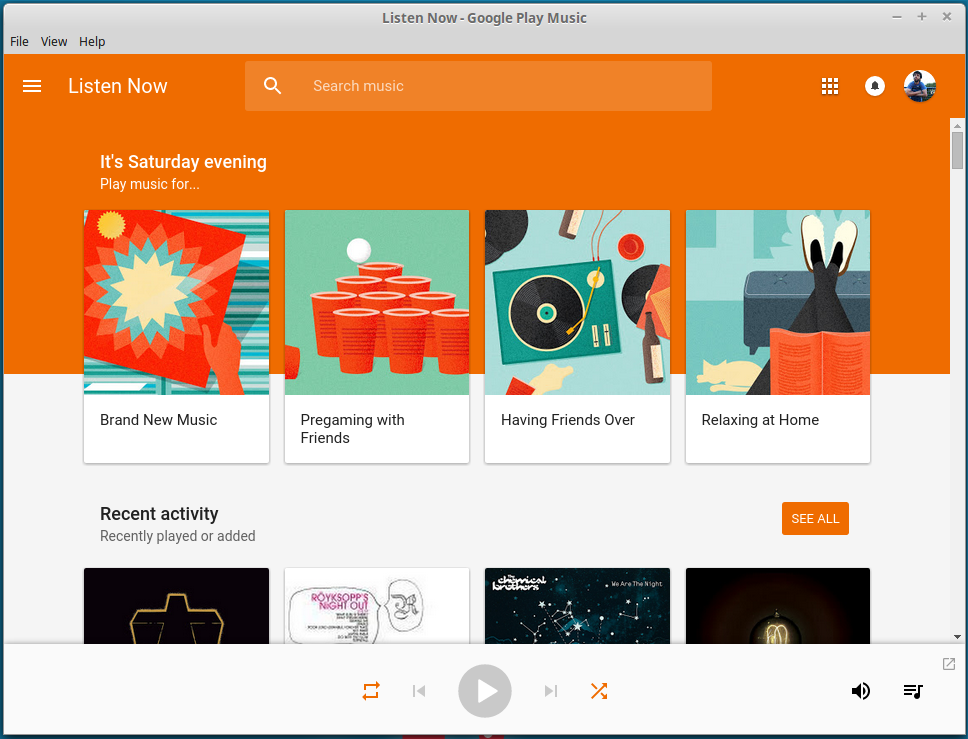 This was written as a successsor to google-music-webkit. When upgrading between versions of nw.js, there were regressions with taskbar and shortcut bindings. We wrote this as an alternative.

google-music-electron can be installed globally via npm:

When the application has launched, it will appear in your taskbar and via a tray icon,

Interested in hearing about updates and new releases of google-music-electron?

If you are on GNU/Linux and your desktop environment supports MPRIS, you can install our MPRIS integration via:

google-music-electron can be updated via npm:

We have a few CLI options available for you:

To get a local development copy running, you will need:

Follow the steps below to get a development copy set up:

After running the above steps, a copy of google-music-electron should begin running.

After getting our local development set up, we can go one step further and get google-music-electron working on our CLI as if it were installed via npm install -g.

More information on npm link can be found in npm's documentation:

Source images are kept in the resources/ folder. Icons are maintained via Inkscape and the play/pause buttons are isolated in layers.

At the time of writing, Inkscape and Image Magick seemed to be generating non-transparent backgrounds upon converting SVG to PNG.

In lieu of a formal styleguide, take care to maintain the existing coding style. Add unit tests for any new or changed functionality. Lint via npm run lint and test via npm test.

Support this project and others by twolfson via donations.

Headphones designed by Jake Dunham from the Noun Project

As of May 16 2015, Todd Wolfson has released this repository and its contents to the public domain.

It has been released under the UNLICENSE.