The topology viewer depicts the secondary structure of a protein in a 2D representation, taking into account the interactions of these secondary structure elements. This leads to a consistent display of sheets and domains in the structure. For PDB entries with multiple copies of a protein, the best chain is used. The topology viewer also depicts value-added annotation from SIFTS including residue-level mapping to UniProt, sequence families (Pfam), structure domains (SCOP, CATH) and structure quality from wwPDB validation reports.

It is a PDB Component Library component. 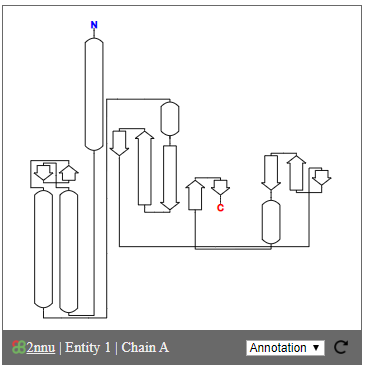 Please use github to report bugs, discuss potential new features or ask questions in general. Also you can contact us here for support, feedback or to report any issues.

The plugin is released under the Apache License Version 2.0. You can find out more about it at http://www.apache.org/licenses/LICENSE-2.0 or within the license file of the repository.

...you might also want to have a look at the PDB Component Library.