React Aspen is the most performant solution for displaying dynamic nested trees in React apps.

It's uses lightning fast TypedArrays to represent the data and react-window for super-efficient rendering. You define what needs to be rendered and Aspen figures out the how, while leaving you 100% incharge of the looks.

React aspen is used by some of sweetest companies around the planet:

Using react-aspen?
Add your company by creating a pull request

These were just some of the awesome features Aspen has to offer. Aspen is a very low-level library with a lot of very low-level API's. With that said, your imagination is now the limit!

* Decorations system is not part of the core lib, instead its shipped separately as aspen-decorations package, see its README for how to wire it up with react-aspen

vscode and react-aspen were put head-to-head and stress tested by repeatedly expanding and collapsing node_modules directory which contained 562 directories. That is 562 items coming in and out of view on each expand and collapse respectively.

Each click event lead to toggling of directory state and an immediate render. 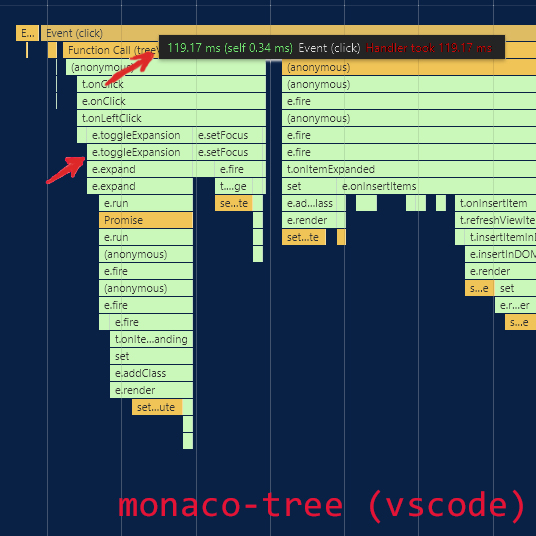 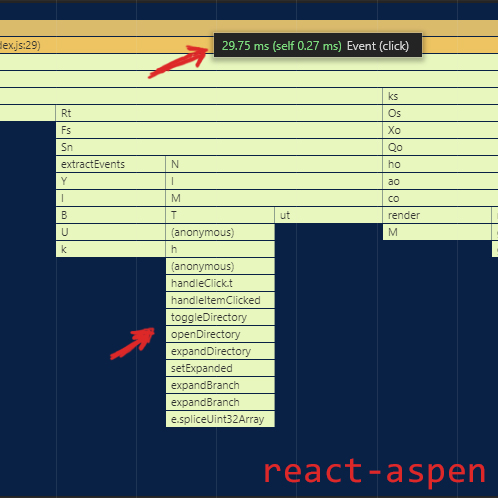 Since react-aspen is a low-level package, it does require little bit of love on your side. But once setup properly, you'll be set for eternity.

It is highly recommended that you fork off of react-aspen-demo which has almost all of the features implemented and ready-to-go. Features like keyboard shortcuts, dragging-dropping and other bunch of cool stuff. Once you fork, please give back by creating a pull request should you make a change. That helps all of us.

As an alternative to forking, you can consider making it a git submodule in your project.

Here's a very stripped down version of what it takes to get Aspen going:

Above example only describes the moving parts it takes to get Aspen operational, react-aspen-demo has everything you need to use it in a production app.

Aspen comes with a decoration system to ease styling/tagging things for you. You can define a set of classnames (or "tags") to be applied to an item, optionally all of its children (you can use negations, like CSS's :not selector). Decoration engine will keep all the inheritances and negations up to date even when a node changes its parent.

See aspen-decorations for an example on how to wire it up with react-aspen.

This project is written using TypeScript and all the API is documented using TypeDoc which can be found here.

Ports on other frameworks

At this point I do not plan to work on porting aspen to other framworks (vue, angular or vanilla). But good news is, 95% of what makes react-aspen come to life is available as separate standalone package called aspen-tree-model. Most of the features listed above are actually part of aspen-tree-model package (except logic for inline prompts, since it's a UI thing). I believe it should be fairly easy to make that work. If you do bring aspen to another framework, please open a issue/PR so we can add that to this readme.

Licensed under MIT license. If you use this package in your app or product please consider crediting as you see fit. Not required, but would be nice 🙂