An extensible document processor, suitable for human-friendly markup. Take it for a drive with your Markdown document of choice:

The basic approach to all solid document processors is that they use a lexer-parser pattern to break the doc down into its smallest part then sequentially put them back together (in our case, as blocks with inline text).

docproc isn't any different there. What docproc aims to do is create a pattern for configuring lexeme detection and block/inline handling. Once you get a sense for how these pieces fit it should make writing your own processor easy. 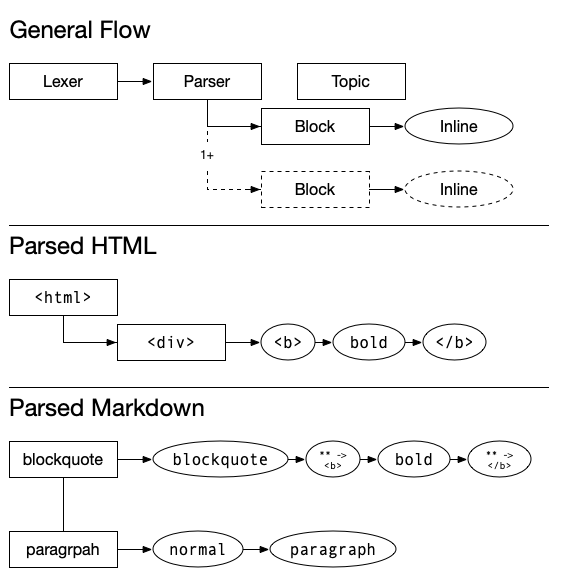 docproc makes no assumption about what you're trying to process, but it does come with a Markdown (CommonMark) plugin and DinoMark plugin, which enhances CommonMark with more dynamic processing capabilities.

How it Works (High Level)

Let's use the following snippet of Markdown as our reference:

To start, we need to specify the following lexemes:

Anything that isn't explicitly identified is grouped together and emitted as their own lexemes.

Each instance of a block has its own handler instance.

Let's trace how each token changes the state of the parser, starting at the block level:

Pretty simple so far. Now let's look within the block and see what happens with the inline tokens. I'll use the paragraph handler:

When you turn the document into a string, you get all the pieces back, assembled from fragments of HTML returned from the different handlers.

That's basically it! You can see it all put together in readme.example.ts