Look, it's yet another node_modules cleaning tool! There are lots of these around, but I still found the need to write my own. See the Alternatives section for more details.

This CLI tool combines the features that I could not find in other tools: 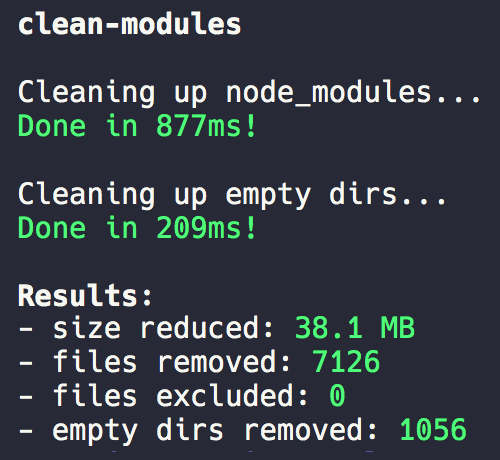 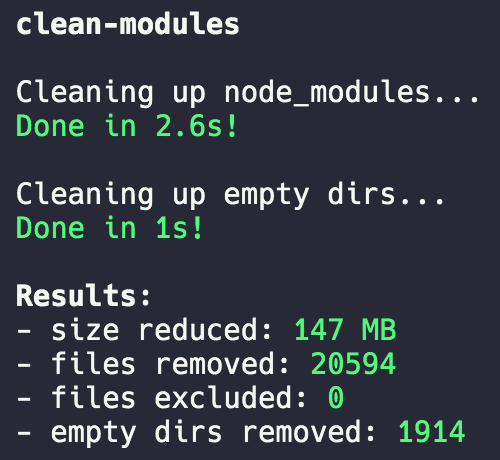 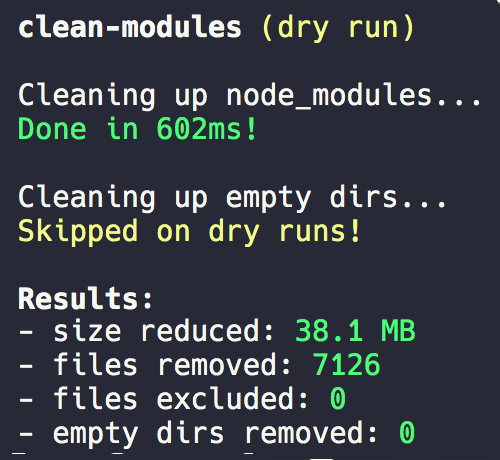 Simply run the command in the directory where your node_modules are:

You can also pass any options that you need, like custom globs or a path to a specific node_modules directory.

Check out the Options section to see all available options.

The default command, cleans up your node_modules based on a set of most likely safe glob patterns and removes empty directories.

Accepts a glob string of files/folders to include that are not included by default. Can be added multiple times or passed multiple strings.

See the glob patterns section for info on how the globs are parsed and what globs are included by default.

Accepts a glob string of files/folders to exclude from the list of included files. Excludes files included by both --include option and by default. Can be added multiple times or passed multiple strings.

See the glob patterns section for info on how the globs are parsed and what globs are included by default.

Accepts a path to a directory to run the script on.

Accepts a path to a file from which clean-modules should read any custom globs. See the glob patterns section for information about how the glob file works and what patterns work.

Excludes all default globs, using only custom globs added through the glob file or by the include or exclude options. Useful if you want complete control over what files to include.

See the .cleanmodules-default to see what patterns are included by default by default.

Runs the script and prints the result without actually removing any files. Does not count the number of removed empty directories.

Only logs a final JSON dump at the end of the script (useful for logs or services).

Skips the confirmation prompt at the start of the script.

Compiles a list of all files that would be included by clean-modules and gives a breakdown of:

Because of the amount of data it can be useful to pipe it somewhere, like:

The analyze command accepts several of the default command's options and applies them in the same way:

clean-modules accepts globs from either a configuration file (.clean-modules next to node_modules by default) or CLI arguments. It uses .gitignore-like glob patterns that are converted to valid picomatch globs, which is what is used to match file paths under the hood.

The same type of patterns are accepted by both the --include/--exclude arguments and the glob configuration file.

The default globs can be found in the .cleanmodules-default file. It only contains inclusions (as exclusions would override custom inclusions) and consists of a large list of the most common files that are safe to remove.

That said, it's impossible to guarantee that none of the files are needed, and you might need to do custom exclusions depending on what packages you use.

The most common issues I found with available tools are: