I am a beautiful React.Component tree and I will help you present FS hierarchy within a React App. No dependencies, just pure awesomeness! My creator has created me after testing few alternatives for tortilla.academy, and has found nothing which is as stylish and can show git-diff annotations right out of the box next to each file (here's an example page which was built with me). 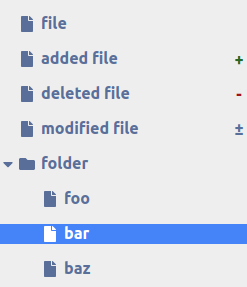 This is how I look like behind the scenes:

A small demonstration app of me can be found in the demo dir.

My nodes will pop and glow once you click on them. I'll be sure to notify you whenever it happens ;-)

I can also notify you on...

If you really want, you can change my colors with the theme prop, using the following variables:

Each of my nodes is an entity of its own and will do exactly what you tell it to:

You can also ask for any of its details, like...

* A node is an actual instance of its belonging React.Component.

You should also know that...

If you like what you see you can install me with npm:

Feel free to use me (MIT license)!